Back to Services Main Page

Lipids in blood and lipoproteins

Cholesterol and triglycerides are lipids that fulfill essential functions in our body. Cholesterol is a fundamental block of cell membranes and participates in the synthesis of hormones, while triglycerides serve as an energy reserve for our muscles. Both travel through the bloodstream transported inside macromolecular structures called lipoproteins. 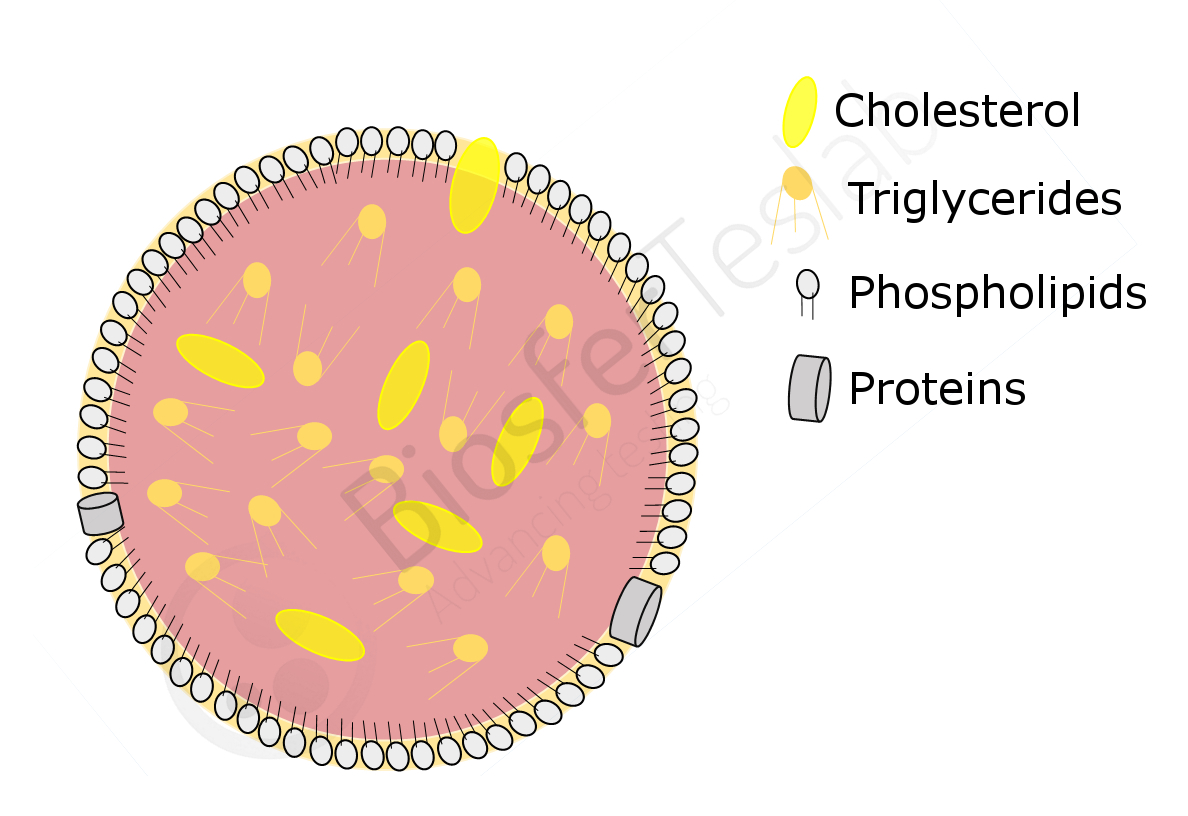 The different classes of lipoproteins have different effects on the cardiovascular system and can be harmful or beneficial. These classes in turn can be divided into subclasses. As a result of the lipoprotein profile, associations can be made with characteristic profiles of risk of suffering CVD.

Current standard approaches to blood lipoprotein profiling are time consuming and labor intensive and that is why effective quantification methods are needed to improve the detection of lipoproteins and the prevention and diagnosis of CVD.

The Liposcale® Test arises from the need to provide health professionals with better tools to help them make decisions in their daily practice.

Liposcale® has been developed to determine both the basic lipid profile composed of total cholesterol, LDL, HDL, non-HDL and triglycerides, and an advanced lipoprotein profile that includes the lipid composition, size and particle concentration of the main classes of lipoproteins (VLDL, LDL, and HDL), as well as the particle concentration of 9 subclasses. Below are all the variables that are obtained after the test: 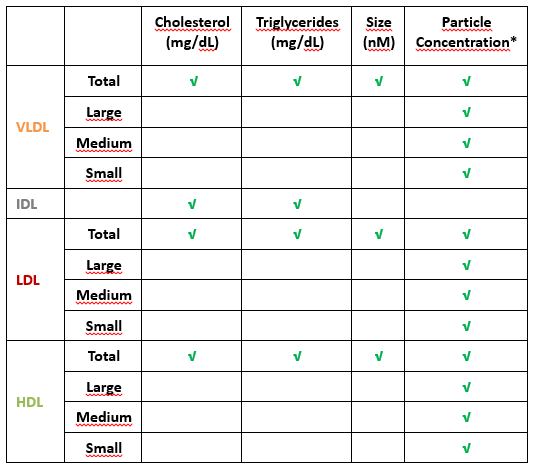 This Test has been developed by Biosfer Teslab S.L. and it is commercialized at European level by Laboratorios Rubió.

The Liposcale® Test generates a report, differentiated in two parts, for each patient.

The lipid contour: It is a graphic model designed by Biosfer Teslab to facilitate the lipoprotein profile interpretation and its association with cardiovascular risk. The lipid contour allows a global, visual and rapid assessment of the patient’s lipid metabolism situation beyond the traditional parameters. The orange silhouette represents the patient’s situation with respect to the values of a general population of 6000 individuals (black circle). In case of high-risk patients (secondary prevention), the discontinuous orange contour should be considered. The patient’s contour delimits a smaller central area when the variables have values associated with an increased risk of developing cardiovascular diseases (values above the recommended value in C-VLDL, TG-VLDL, P-VLDL, C-LDL, TG-LDL, P-LDL p, TG-HDL or below the recommended value in Ø-LDL, Ø-HDL, C-HDL and P-HDL m); and a higher central area otherwise. In addition, if the variables contribute to clearly reduce the area delimited by the curve, they appear in red on the panel as a traffic light on the left; otherwise they appear in green. If the value is similar to the recommended value, according to the classification of the variables mentioned above, it is represented in yellow. 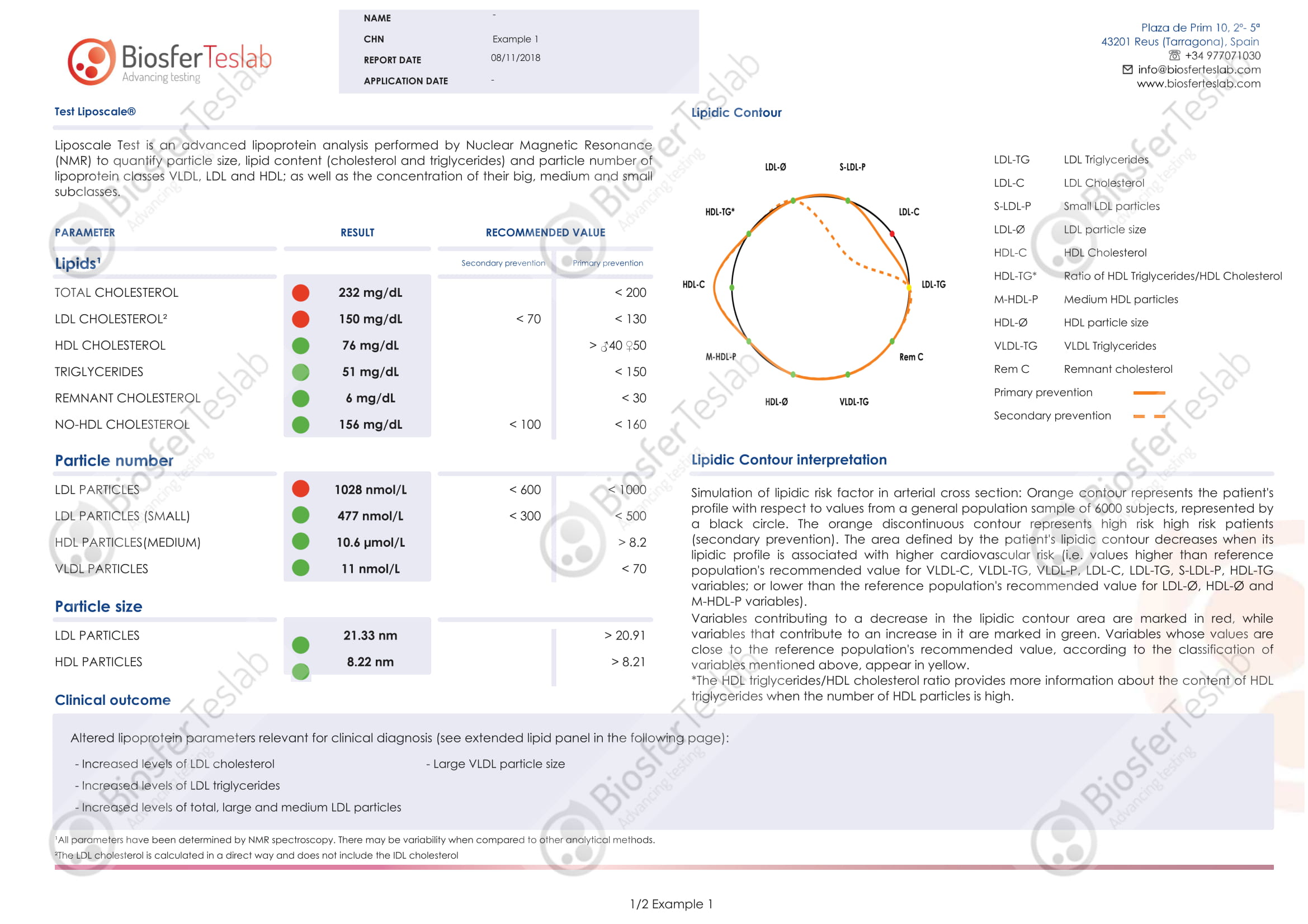 In the second part we find the extended lipid panel, which includes all the variables resulting from the Liposcale® Test, with the recommended values for each of the variables. In addition, next to each variable we find a bar that represents the percentiles in a reference population (which includes 6000 individuals from the general population of men and women between 15 and 85 years old). 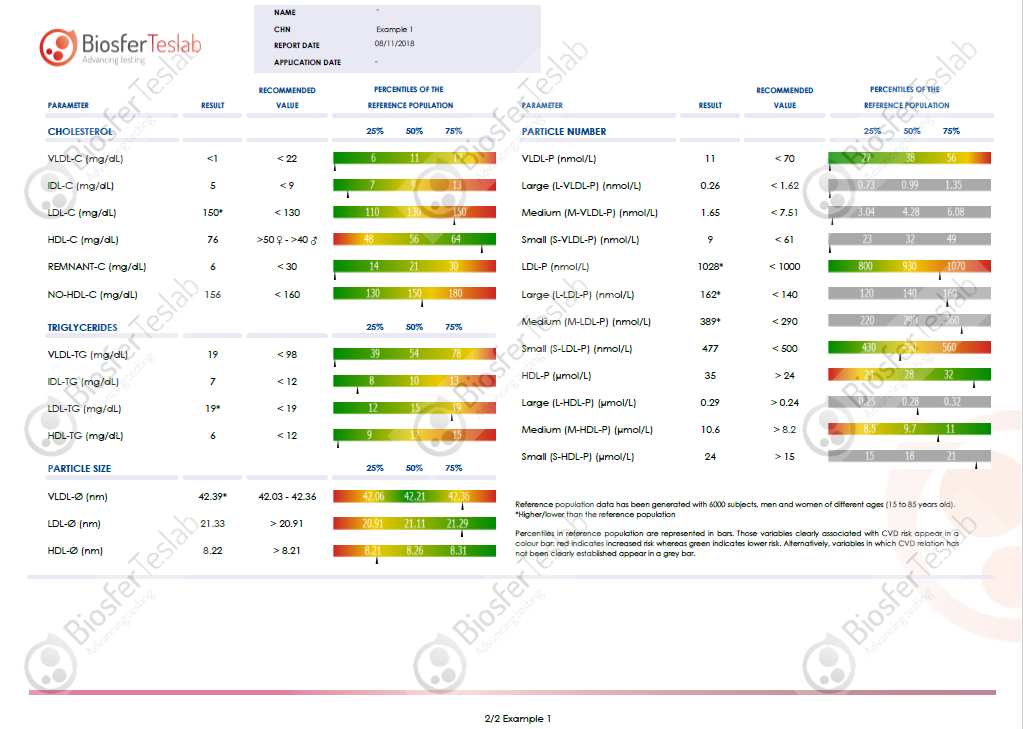 Do you want to know more about the report?

The Liposcale® test helps to make personalized preventive and therapeutic decisions in the estimation and approach of CVD risk. This exhaustive characterization of the lipoprotein profile facilitates the detection of individuals with an increased risk of CVD

The Liposcale® test allows evaluating the lipid profile modifications in nutritional or pharmacological interventions, being able to know the intervention effects on the lipid metabolism.

In particular, the company has developed a glycoprotein test and a LMWM test - that includes, branched amino acids -, as they have been identified as inflammatory markers and involved in insulin resistance processes, respectively.

This aid is programmed in the axis 1, "Boost research, technological development and innovation", specific objective OE 1.2.2, "Transfer and spreading of technology and cooperation between companies and universities or other research centers", line of action "Collaborative R+D projects" under the framework of the FEDER Operational Program of Catalonia 2014-2020 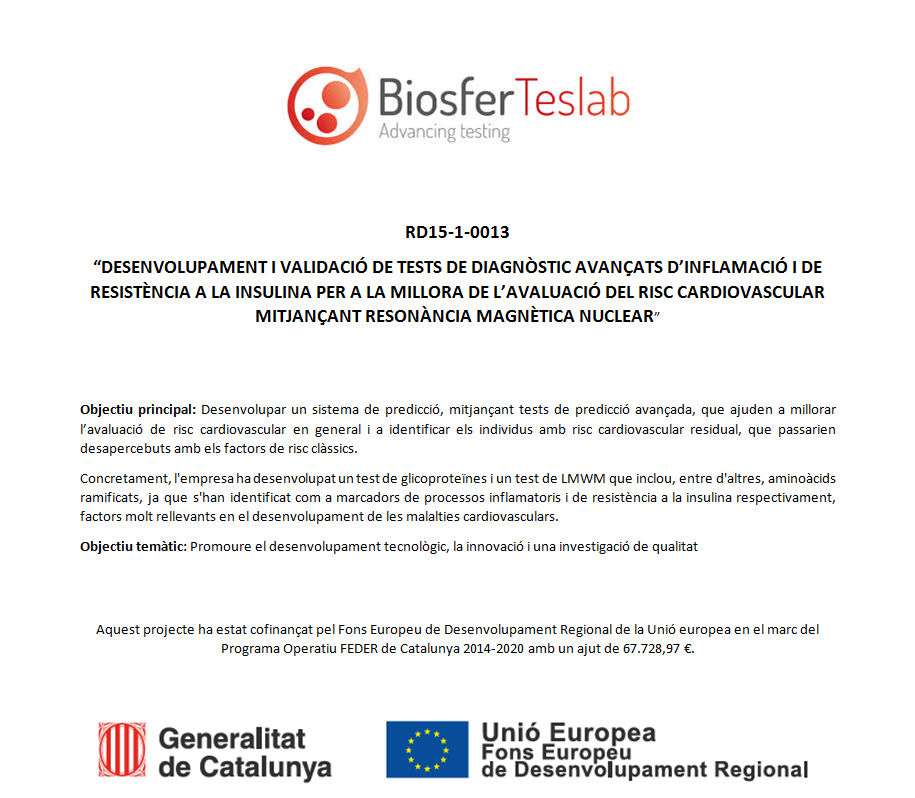